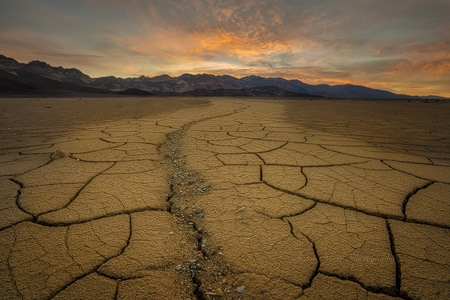 Open Choices, Indicated Path: Some recent rain and snow summoned me to Death Valley. The mud cracks keep calling to me, and this new rivulet (it wasn’t there in November) made a nice leading line and some smoother cracks around it. The desert offers so much to choose from in every direction, but there’s usually a clear path if you know what to look for. It might not take you where you’d like, but you can always change course. –Death Valley National Park, California 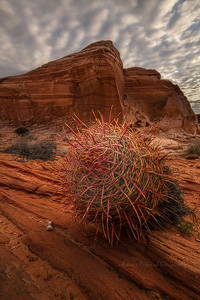 Fire Barrel: The Valley of Fire isn’t far from Las Vegas, but the energy is vastly different between the two locales. Vegas strips me of energy rapidly, but I could spend days wandering with interest in the Valley of Fire. The red sandstone is incredibly vibrant and the Leconte barrel cactus subspecies has a much larger circumference than the California variety. –Valley of Fire State Park, Nevada 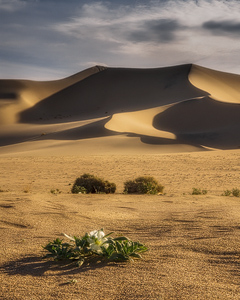 I Am at Home: The Eureka Dune Evening Primrose was put on the endangered species list due to the popularity of off-roading and other destructive acts popular in the last fifty years. Having a place to call home is important and this primrose has nowhere else where it grows. The primrose is unassuming and doesn’t seem very interesting until spring when the blossoms appear in a range of light pink to white. Fortunately, regulation has brought a resurgence of the endemic species of Eureka Valley, and the primrose been moved from the endangered list to threatened. —Death Valley National Park, California 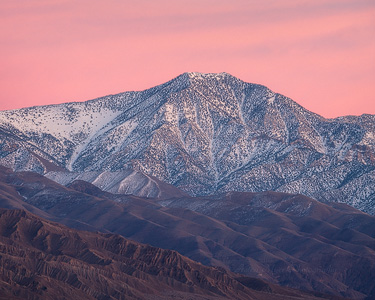 Desert Snow Line: The desert doesn’t see much snow, but when it does, it’s all the more beautiful. It doesn’t look like much from here, but it was at least a foot at 11,000 feet, and the bristlecone pines at the top will get their annual water supply when it melts. Centuries of erosion from the snow melt carrying sediment produce the alluvial fan seen in the foothills. –Death Valley National Park, California 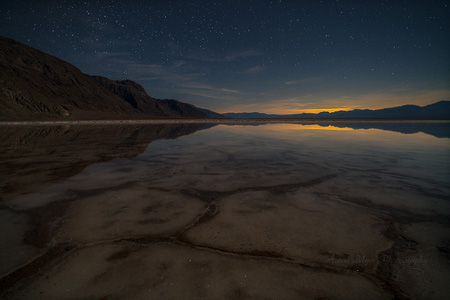 Rising Salt: A flooded Badwater Basin is always a treat, but it coincided with a setting waning crescent moon that lit the mountains. –Death Valley National Park, California 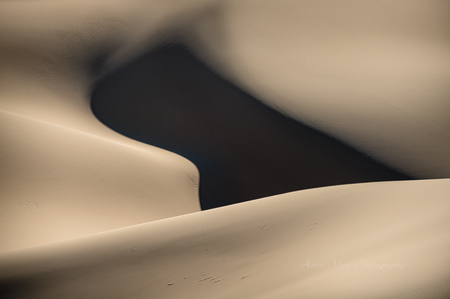 Event Horizon: The soft white sand curves of the Eureka Dunes will draw you in, and the shadows can be deep when direct light is lost. It is as comfortable and simple as falling into as a routine or pattern in day-to-day life.–Death Valley National Park, California 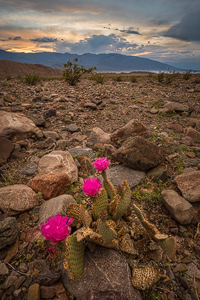 The High Cost of Mating: These beavertail pricklypear were at about 1,000 feet, but overlook Death Valley itself. The slow collection and careful rationing of water makes photosynthesis and energy production a trial, yet the extravagant colors, sweet nectar, and production of untold quantities of pollen are still worth it for the chance to reproduce. As humans, we can probably relate. —Death Valley National Park, California 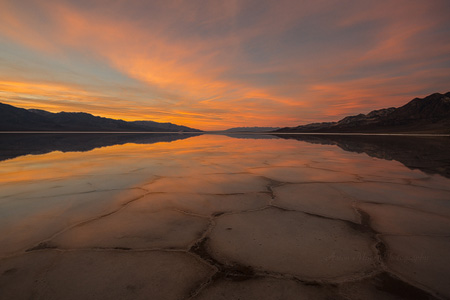 Beneath the Mirror: Reflection opportunities in Death Valley aren’t too common, so exploration of the temporary state of Badwater was rewarding. As the water evaporates, the salt crusts will rise and make their characteristic polygon shapes. I got to share this space with a nice Spanish man who had been driving around California and the southwest. He said this sunset was the most spectacular thing he got to see.–Death Valley National Park, California 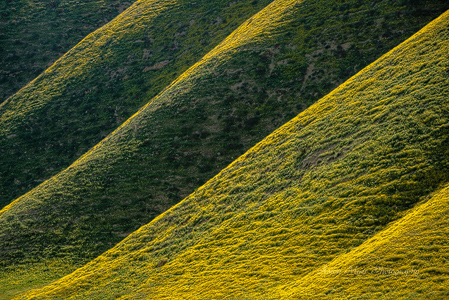 Like-Minded: These hillside daisies have most of their resources put towards reproduction, and the strong lines of the carved mountain join them.–Carrizo Plain National Monument, California 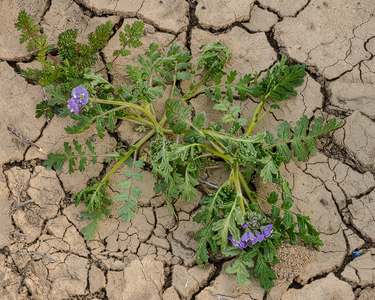 Beauty from Poverty: The carpet of wildflowers is the biggest draw to Carrizo Plain, but sometimes there’s a story at the edges of the extravagant. This pair of phacelia growing out of the mud cracks at the edge of a huge patch of thriving wildflowers spoke volumes. —Carrizo Plain National Monument, California 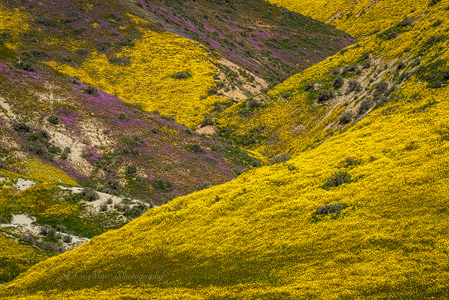 Prevailing Wisdom: The mountains of Carrizo Plain are annually awash in yellows, purples, oranges, and greens. The dominant yellow hillside daisies here meet with the purple phacelia in what appears to us as staggering beauty, but is really a competition for space and survival. —Carrizo Plain National Monument, California 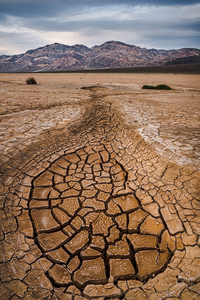 Falling into a Rut: Even though water is hard to come by in Death Valley, it still makes its presence known with potholes, alluvial fan, and dry lake beds. This small pothole may eventually make a small ecosystem when filled with water. As time goes on, the paths we take will become more worn and difficult to change.–Death Valley National Park, California 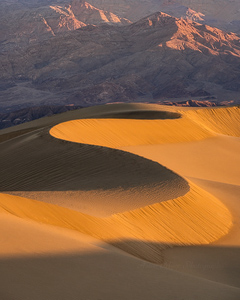 Sunbathing Serpent: We have a love hate relationship with wind and sand dunes. Wind shapes the sand into wonderful textures, but being on the sand during high winds is punishing to both humans and camera equipment. No winds often mean unsightly tracks. Fortunately these dunes were renewed without high winds present. —Death Valley National Park, California 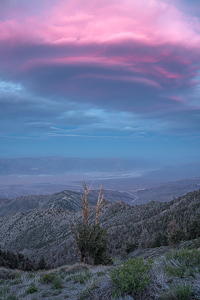 Abalone Takes Flight: This cloud caught my eye. It seems to be several lenticular clouds stacked on top of one another, but didn’t quite have the correct wind conditions to become a Sierra Wave cloud. It has the appearance of an abalone (to me anyway) and lit up a bright pink at the tail end of sunset on Telescope Peak. The twin bristlecone pine reaches out to the salt flats that remain after Lake Manly evaporated. —Death Valley National Park, California 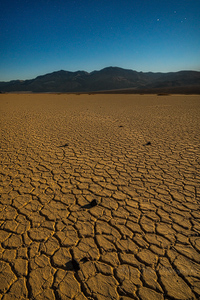 Fallen Constellation: The formation of shapes when water collects and evaporates from old lake beds are mesmerizing. The rocks that washed down from the nearby Panamint Mountains embed themselves into the cracks when the playa is wet, though some of the rocks have been found to be fragments of meteorites as well. As we wandered the playa waiting for the full moon to rise and bathe the ground in light, a fireball (a meteor brighter than Venus) sizzled across the sky in one of the most spectacular celestial displays we’ve seen. The shape of these rocks pointed towards the Panamints in the same pattern as Perseus (in the upper right) in recognition. —Death Valley National Park, California 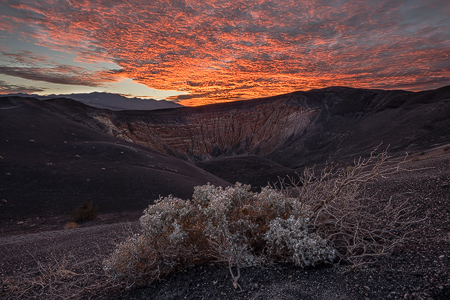 Volcanic Basket of Holly: The Ubehebe Crater was formed less than a thousand years ago when some magma hit water below the surface of the earth and exploded. It showered the ground with volcanic rock more than a mile from its origin and exposed some beautiful geology. Holly and creosote survive in the arid rocky soil, but this holly plant seemed to be appropriate foreground on this cold Christmas morning.–Death Valley National Park, California 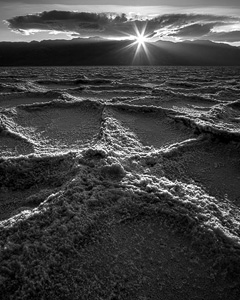 Starman: Badwater Basin has characteristic lifted polygon shapes that naturally form after flooding. When scouting a spot I noticed that the sun lit up this shape that looked like a sea star, so I composed this image and waited for the sun to fall below the cloud. A starburst furthered the theme. Telescope Peak is lit up by the setting sun and rises 11,331 feet above sea water over Badwater which is 282 feet below sea level. What an impressively steep rise! —Death Valley National Park, California 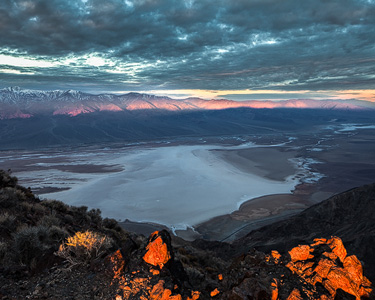 Dante’s View: This sunrise on New Year’s Day made a narrow opening in the clouds that lit up the rocks in front of me along with the Panamint Mountains across the valley. Dante’s View overlooks Badwater Basin from the Amargosa Range and gives a view of the salt flats that are left over from Lake Manly which evaporated due to a change in climate. —Death Valley National Park, California 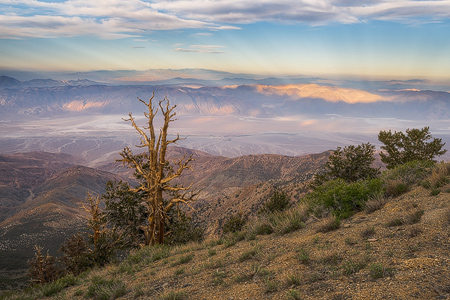 Bristlecones Watch Death Valley: A grove of Great Basin Bristlecone Pines grows on the slopes of Telescope Peak in Death Valley. The lack of water requires carrying all you need to sleep on the peak, but the temperature was a pleasant 70 degrees instead of the 110 degrees at the lower elevations. Clouds were swirling so the sun sent anti-crepuscular rays across Death Valley and dappled light to the Amargosa Range. The Bristlecones stand watch on the slopes of Telescope Peak itself with their weathered and wind blown branches.–Death Valley National Park, California 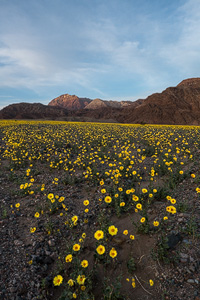 Fan Out: A superbloom comes along about once a decade when consistent rain gives signal to accumulated dormant seeds that it is time to grow. 2016 produced a huge array of blooms in Death Valley where plant life is sparse. These Desert Gold blooms led to the Amargosa Range getting last light. —Death Valley National Park, California 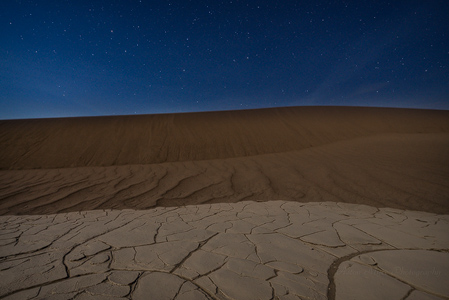 Crescent-Lit Textures: The Mesquite Dunes are a popular location and are often covered in footprints. Fortunately, strong winds had just recently cleaned up the dunes to showcase all of the interesting textures that the wind can produce. This clay formation led naturally into the scene and up to the appearing stars as dusk fell to night. A low crescent moon provided the natural lighting to the ground and some wispy clouds streaked across the sky.–Death Valley National Park, California 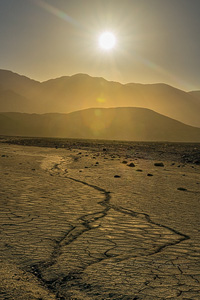 Baked: We spent a few days devoted to mud cracks in Death Valley, focusing on the washes below the Amargosa Range. Winter storms leave rivulets that form interesting patterns and deposit all kinds of objects, both natural and man-made. Though it isn’t the hottest place on earth in November, evidence of all that summertime baking abounds. —Death Valley National Park, California 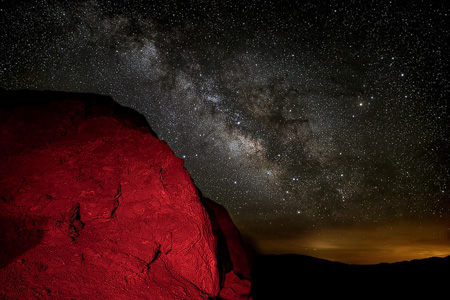 Martian Milky Way: Death Valley has an alien landscape between the salt flats, rugged colorful mountains, and odd phenomena like sailing stones. The most awe inspiring feature are the stars though. The yellow light pollution of Las Vegas is only visible at the horizon, but the rest of the sky is the darkest black at night. The core of the Milky Way combined with some light painting of the rocks using tail lights produced what we think Mars would look like at night. —Death Valley National Park, California 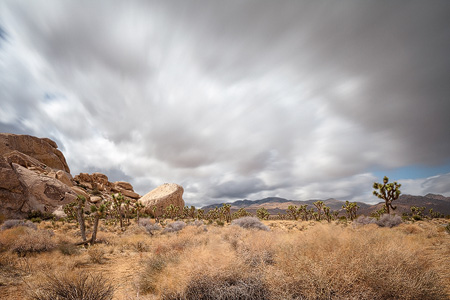 Praying to the Sweeping Storm: Joshua Trees are named as such because they reminded Mormon settlers of Joshua praying to the heavens. This large fast moving storm brought March snow to the high desert. The Joshua trees stayed steadfast while the grasses blew around in the wind. —Joshua Tree National Park, California 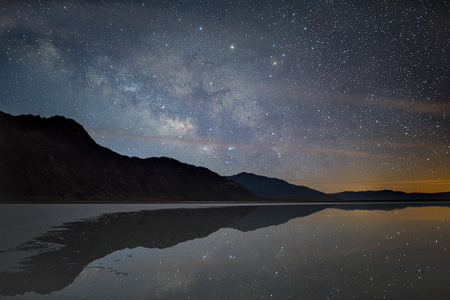 Salted Shore and Sky: The skies of Death Valley called again. Badwater Basin being the lowest spot in North America means that rains will often flood the salt flats in the winter months. Finding this pool required some scouting the previous day, and finding it in pitch darkness proved challenging. The reward though was seeing a rare reflection of the stars in one of the driest places on Earth. —Death Valley National Park, California 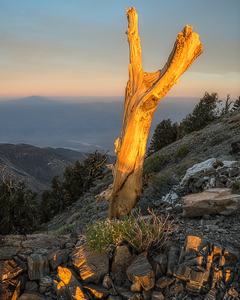 Wishbone: When I woke up on Telescope Peak the winds had died down, which made walking along the ridge much easier. The sunrise was quite hazy, but the golden light reached this snag and made it glow. Also figuring prominently is the shadow of Telescope Peak on the Argus Mountains.–Death Valley National Park, California 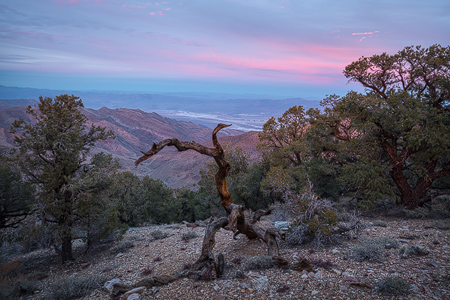 Life and Death: Death Valley isn’t known for its forests, but a trek into the Panamints will reveal forests of pinyon pine, juniper, and bristlecone pines. This area between 6,000 and 9,000 feet lends itself to Pinyon Pines. The pinyons can grow in the sandy, but relatively good soil and overlook Death Valley itself with the salty remains of Lake Manly. The pinyon pine snag reveals the rich colorful wood of slow growth trees and stands as a reminder of the harsh environment in which they grow. —Death Valley National Park, California 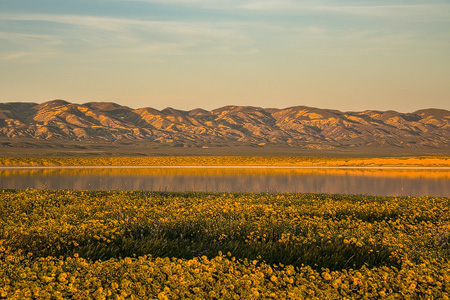 The Goldfield Show: Carrizo Plain managed a superbloom in 2017 with vast areas absolutely covered in goldfields, fiddlenecks, phacelia, and tidy tips. The sea of yellow was broken up nicely with a patch of foxtail as the sun set on the Temblor Range. —Carrizo Plain National Monument, California