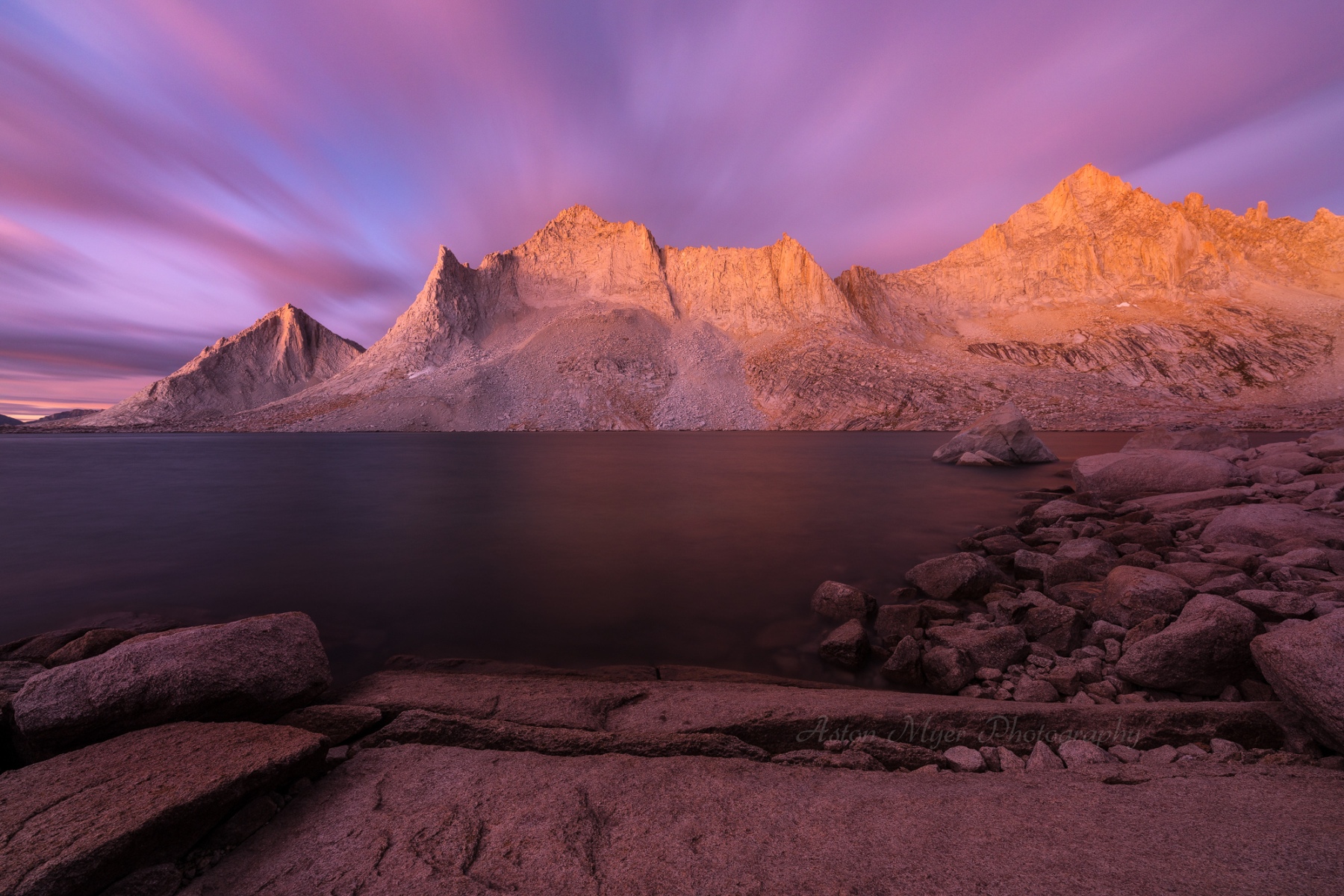 Traveling into the Sierra wilderness with a full camera setup is hard work and may return you nothing but unremarkable conditions in special places. At a minimum, the smaller scenes can give a sense of the place without a need for ostentatious sunrises, though I’ll take a sunrise with explosive color if it’s offered. After spending three weekends in a row at art festivals selling prints, I had a plan to head into the John Muir Wilderness with my friend Eric and see as few other people as possible. We took a relatively unpopular trailhead and hiked a few miles off trail up steep granite to spend two nights in a lake basin above 11,000 feet. In our two days at our camp, we saw one person going on an 11-mile loop day hike. That was it. His goal to see as much of the area as possible was quite different from mine. Setting up and exploring a base camp helps me to see it a little bit better and explore the details. The rest of our interactions with other living beings were pikas calling out, marmots ambling around the talus, scattered shrubby whitebark pines doing their best to stay supple, and some cushion buckwheat and similar low-growing plants eking out a living in the alpine zone. There were plenty of spots where people had slept, and we knew this because there were dozens of small walls constructed by other temporary human residents to create a wind break. These were largely ineffective and flies in the face of Leave No Trace, so we spent a long time breaking down the surprisingly well-constructed granite walls. Also, there was the odd piece of trash. A one-use flosser (gross) was found by Eric, and I found the plastic part of an adjustable baseball hat (I’m sure there’s a story there).

On our arrival day, the wind was gusting strongly enough that it flipped my tent with contents inside. Fortunately, all the camera equipment was with me outside the tent and my mattress didn’t pop. I can stand the rain and I can stand cold, but wind eventually wears on me (see Hyperbole and a Half “Sneaky Hate Spiral”). After my friend and I prevented my tent from pursuing its dreams of being a tumbleweed, I spent some time wandering around looking for interesting subjects. There were a few small pools left over from the recent thunderstorms, resilient plant life growing out of wherever it could, and the talus that was littered everywhere by the impressive eroding peaks. Sunsets didn’t look terribly promising without clouds to carry some color since some nearby high peaks blocked out the sun early and choked off my source of lower-angle warm light. I usually plan my trips around the moon phase so that I can get a night image in case daytime is unremarkable for wide-angle photography. A waning moon below 60% illumination can offer warm light on mountain peaks as it rises without completely wiping out the stars. Some talus hopping along the shoreline of our water source lake gave me some ideas for moonrise, but it required some awkward positioning that would be difficult in the dark. After a nap from 7-10 pm, I returned to my moonrise spot with the air mercifully still, and there was enough moonlight to highlight the peaks, but not so much to wash out the stars.

The next morning I continued my exploration to the west and found some beautiful spots along the shoreline. The alpenglow worked well, but there was zero cloud cover. I found another composition at an outlet to a higher lake that would also be good at sunrise, but the light was a bit too harsh, so I made an appointment with the spot for sunrise the next day. The sun was slow to reach our camp with a huge peak blocking the sun, so we moved around trying to keep warm and I collected a few small scenes along the way.

During the day we decided to fully explore our basin and look over a few canyons from our high vantage point. Even with a lighter day pack, the talus hopping required vigilance to avoid slipping into a crack or the lake. A brief break for lunch and we explored to the east. We were also route-planning for our exit since it seemed like a good idea to scout new vantage points. However, the talus was even more difficult than our trek west. After determining that our lake had the best photographic options, we tried to take the high route back to our camp for an easier path. This proved fruitless since it started looking more dangerous than our low route, but a single cushion buckwheat with no neighboring life to speak of was fun to capture.

After a warm freeze-dried dinner, I considered hunkering down for the night to avoid the heavy winds. Meanwhile, some clouds made their way over the mountains to the west, so I went to rediscover one of the pools I had seen. The clouds were moving quickly from the high winds, but I managed to catch a very brief reflection in the small pool.

The winds didn’t let up. I planned on waking up for moonrise again, but I never really got to sleep. I’m sure I managed to get some sleep, but the wind would blow on my tent for a few minutes, catch its breath for about 15 seconds, and then start up again. It was like listening to someone learn how to play a brass instrument. I skipped night photography and waited patiently for my phone to read 5 am. When I emerged from my tent, I saw some clouds, but it was hard to tell the extent of them. I came to one of my compositions from the previous morning, and by that point, the alpenglow had started. The peaks were highlighted, and the clouds were that predawn magenta. As I watched the alpenglow and colors change as more light came in all I could think of was, “worth the price of admission.”

I wanted to make the most of the sunrise, so I abandoned the shoreline of the lake in search of my lake outlet composition. Alpenglow was over as the first bit of direct light hit the peaks, but looking back to the east, I suspended my plans for a previously planned image and ran around this small pool to capture the stunning color and gusting winds. Normally gusting winds on a lake give a choppy unpleasant look, but the winds were fast enough, and the pool was small enough, that it made an interesting consistent pattern with a fast shutter speed.

I quickly moved back to my outlet, and this morning a bright cloud and a softbox effect improved the lighting dramatically over the previous day.

I found one more human-constructed wall to knock over and I returned to camp. Eric had already packed up since it looked like a storm was moving in. I broke down my tent and it immediately tried to flutter away and stakes clattered against the granite even though the stakes were buttressed with rocks. Three tent stakes flew away and we only found two, since gray stakes on gray granite are hard to spot. If you find a gray tent stake in the Sierra, it’s mine! As the storm rolled in the light of the early morning sun, it had one last gift as it highlighted the lake’s shoreline.

With 4,500 feet to descend, and a storm chasing us with graupel (tiny snowballs), we exited rapidly, though I plan on returning to neighboring basins early next season.